For 2012, together with a group of performers, dancers, and choreographers we are planning a CAMP in nature. Inspired by the ideas of being-together, of being-with, of participation, we conceive the CAMP in reference to art projects at Monte Verità around 1910, and the concept of artists’ collectives in the 1960s and 1970s (Cage/Cunningham, Judson Dance Theatre, here especially Anna Halprin: On a stage designed by her husband, a landscape architect, which was built in the open in the midst of nature, she collaborated with numerous artists, among them Min Tanaka and Merce Cunningham (dance, choreography), John Cage and Terry Riley (music), as well as visual artists and poets such as Richard Brautigan and Robert Morris). 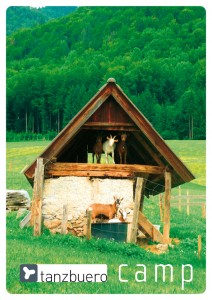 In our camp which for a week will be established in the vicinity of Salzburg, we strive for a contemporary concept of the relationship between performance and nature. We leave the conventional place of discourse (studio, city, atelier) in order to come together in the expanse of the landscape, the indeterminacy of space in a performative setting, to try performance. How is it that 100 years after Monte Verità there is an increased interest in performance in nature, connected with the likewise re-awakened issue of the liberated and emancipated body? Is it the performance body as possibility in its un-affected reduction, a non-baroque model, seduced by simplicity, as a new anti-opulence? “Other” forms of dance (rituals, dancing in nature) are taken up, moulded, transformed. Where do the increased attention to, and the surge of discourses on ritual and spiritual dances come from? Are they the first signs of wear of a “capitve body” embedded in virtualised spaces, is this the beginning of a counter-strategy? Our interest in the performative investigation of these questions is contemporary in the sense of a retrieval of animism into our art, our thinking, and the visualisation, the embodiment of the anti-logos, the mythical, the non-factual. tanzbuero goes all out. During the camp, the participating artists will relinquish all kinds of electronic tools which normally are part of their artistic method as a matter of course. The choreographic processes and performative strategies, reduced to body, spirit, and nature. Through these “no-tech strategies” we reconstruct, as it were, a “monte verità” field of possibility. 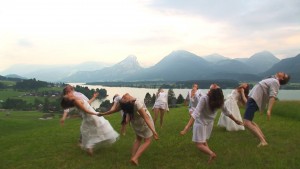 As described in the beginning, in this artistic setting of the camp we also deal with another form of the “I” and thus the “We”, i.e., community. Is it not right now, in the crisis of neoliberalism, that we need new models of togetherness? We wish for new utopias – always conscious that they are utopias! Format: Camp (tents for accommodation and provisions are part of the project), final presentations of the performances developed in situ. Also in planning is a special art film documentary CAMP (Das Kino Salzburg, tanz_house Festival 2012; we are also considering other presentation sites in the country of Salzburg, Austria, and internationally) 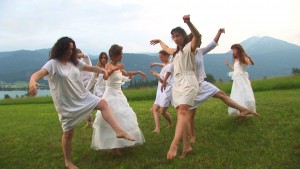 With contributions by: Nicole Haitzinger, Lisa Hinterreithner and Rotraud Kern. In July, 2012 tanzbuero organised a CAMP at the edge of the forest at Wolfgangssee. The invited choreographers and performers lived and worked together for a week. They thought, performed, and staged their bodies in the woods, on meadows in the water, reduced to body, spirit, and nature. In a lecture-video demonstration, Lisa Hinterreithner, Nicole Haitzinger and Rotraud Kern offer insight into this artistic engagement.