Local horizons – collapsed form is an artistic research project which investigates the meanings of local and global beyond identitary claims, neither insiting on a territory of its own nor privileging the subject. Public sharing on Wednesday,November 30 at SEAD (Schallmoser Hauptstraße 48A, 5020 Salzburg)
Begin: 7. p.m. free entry, registration: office@tanzbuero.net 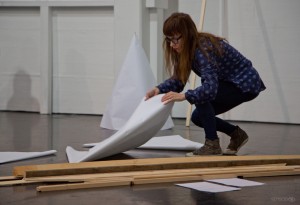 Detached from the universe of an overproducing, post-Fordian culture, our laboratory sets out to trace the massive shifts resulting from the temporary suspension of production pressure, and also puts “established knowledge” into question. We dedicate ourselves to hesitation, searching, doubt – and dialogue as a working method comes into the focus of our project. Phenomena such as collapse, fissure, and deterritorialisation are highlighted as those moments when the familiar mode of co-operation has come to an end and no longer presents the only possibility of going on. Thus, interruption, disintegration and dissolution of paradigms takes the lead and becomes affirmed material. We look into artistic practice as research, as a medium of its own, epistemologically and aesthetically. 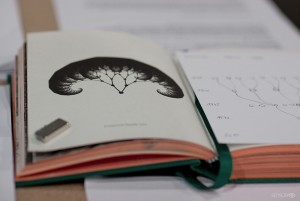 In 13 trains of thought, we evoke the process’s resonances, re-erecting – assisted by the audience – situations which lead one to rethinking, change, to a movement beyond the established categories and patterns. We insist on the idea of toppling concepts and putting them in motion, as a productive, relationship-instigating form of research. Movement of thoughts – also in the shape of exploring expeditions – from Vienna to Berlin and Beirut and back to Salzburg, dialogues, lectures, many hours of listening, articulating questions, and a basically collaborative approach to work determine the discursive/performative format we have developed. local horizons – collapsed form is interessted in a differentiated approach to “materialisation” which dissolves the distinction between subject and object, and thus opens up another frame of reference. We experiment with testing representation strategically by misusing (or overstressing) it, and thus approaching the symbolism entangled in it in a non-committal manner. The body folds into places, accumulates in trains, knots, and fields of thought, stationary localisations waiting to be excavated, almost archeologically. This work makes a gesture towards the body’s readiness to act in the changeable, the shapeable, in openness. The personal here conceives itself as something more than intimate, private or biographical, as something which always is founded in a multitude of encounters (with the world we all are). Against this background of choreography, philosophy, and of course, performance of both (either intermingled or separate), local horizons – collapsed form poses questions regarding the potential of an “artistic practice as research” in the field of culture and beyond, in its broader social context. How can artistic research contribute to our understanding of what things mean in our contemporary world, and how do these meanings effectively shape our thinking? Via performative-discursive movements we move towards a continuously expanding horizon deeply rooted in the local. (Mariella Greil, 2013)

Research: Lisa Hinterreithner and Mariella Greil
Production: Elfi Eberhard and Anna Feiler
Special thanks to: Nicole Haitzinger for the collaboration in the initial phase of the project, to Atal Sherif for the conversations, to Sandra Chatterjee for her contribution of a questionnaire, to our guests Mzamo Nondlwana, Lea Pischke and Sarah Chiesa (SEAD-I.C.E. -Choreographer’s Year)