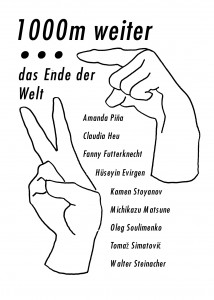 „Glocal“, a term coined by the curator in Visual Art, Hans Ulrich Obrist, refers to the emergence of new art locations beyond well established centers. This new cartography of Art shifts sketchily and process-like between local and global. Obrist formulates in his ten theses on Art in the 21st Century a Polyphony of centers and a new desire for non-mediatized, direct experiences [1]. When considering combining those two statements, which only seem vaguely related in Obrist’s proclamation, the question arises: How can the ideas of Polyphony of Centers and of Immediate Experience manifest themselves as gestures, i.e. as a physical act, an action, an activity?

We ask artists of various artistic and cultural backgrounds to visualize a “glocal gesture” – one that, in the artist’s eyes, glistens, sparkles or even burns ablaze in art and society. A gesture, that corresponds respectively to the specific-local cultural and/or (auto) biographical context and can materialize as polyphonic artificial-artistic in differing media as documentation or fiction (performance, image, text, video, music)… There’s no limit to the imagination: it is essential, that the idea of the „glocal gesture“ does not remain a metaphor, but wants to present itself performatively.

We will collect the submitted gestures and install them in the context of the Schmiede 2011, Schmiede Hallein, in Verdampferturm on Pernerinsel in Hallein (Salzburg, Austria). On September, 17th, 2011, we will open with a mix of performance and exhibition. The Schmiede will then host the network of “glocal gestures” for one week as a performative exhibition within the media-oriented festival.
We look forward to act out in the name of tanzbüro as initiators, coordinators and installers of the collected gestures.