The Art of Creative Resistance Performance, Activism and Permaculture (2014)

Workshop by The Laboratory of Insurrectionary Imagination (F/GB)
With John Jordan and Isabelle Frémeaux.
Part of the research project We are our times (2014)

The workshop The Art of Creative Resistance explores the interfaces between art and activism. John Jordan and Isabelle Frémeaux will introduce tools that enable artists to work within social movements by applying their creativity to develop new forms of civil disobedience and post capitalist living. The methods range from analysing and generating efficient forms of creative resistance, narrative based campaigning to consensus decision making. Furthermore, strategies for using the design science of Permaculture within the context of art activist practices, will be part of the workshop. Permaculture is an ecological design system. Its central tenet is the observation of how eco-systems such as a forest or meadow work. In order to build human systems that are energy efficient, resilient, waste free and productive, one can learn from those studies. 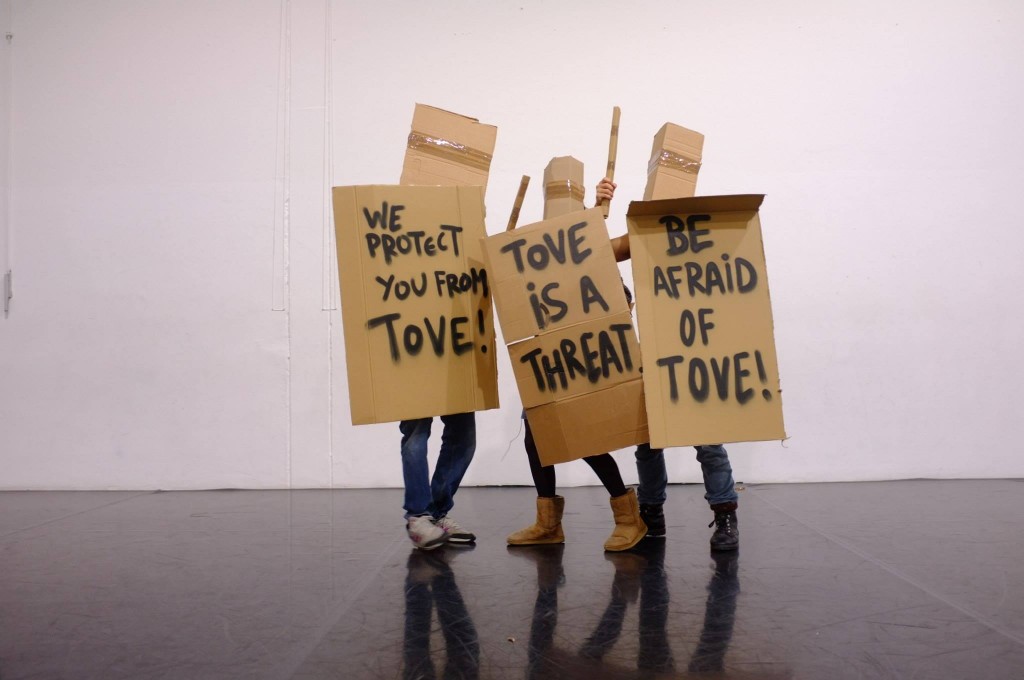 The two day long workshop is designed for artists and activists who are interested in working on the edge of art and activism, performance and political practices.

The artist Claudia Heu is this year’s researcher of the tanzbuero serial What’s Up?

In her research project Wir sind unsere Zeit (We Are Our Times), Claudia Heu in collaboration with the artist Roland Schmidt investigates alternative ways of living (in communities) in the 21st century. Their research topic are places which combine art, living, ecology and activism all in one. Amongst others the two artists visited La r.O.n.c.e., a Permaculture farm in Brittany/France.

Claudia Heu invited John Jordan and Isabelle Frémeaux for the workhop in Salzburg as part of her research.

Together with Roland Schmidt she will present the research results of Wir sind unsere Zeit (We Are Our Times) at the Dance Academy SEAD on December 12, 2014.

The Laboratory of Insurrectionary Imagination
www.labofii.net

Infamous for fermenting mass disobedience on bicycles during the Copenhagen climate summit, touring the UK recruiting a rebel clown army, running courses in post capitalist culture, throwing snowballs at bankers, launching a rebel raft regatta to shut down a coal fired power station, covering the Tate gallery in molasses and falling in love with utopias, The Laboratory of Insurrectionary Imagination (Lab of ii) is not an institution or a group, not a network or an NGO, but an affinity of friends who recognise the beauty of collective creative disobedience. We treat insurrection as an art and art as a means of preparing for the coming insurrection.

Creation and resistance are the entwined DNA strands of our practice. We see art and activism as inseparable from everyday life. Our experiments aim not to make art but to shape reality, not to show our world to you but to change it together. We champion artists who escape the prisons of the art world, who stop playing the fool in the corporate palaces and apply their creativity directly to the engineering of social movements. We befriend activists who value the imagination, listen to dreams and play with the political as they would with stanzas of a poem.

At the heart of our experiments lie new ways of relating to each other and organising ourselves: working without hierarchy, taking direct action, practicing self management and living ecologically, we refuse to wait for the end of capitalism, but attempt to live in spite of it.

A link to a little book on art and activism, co-written by John Jordan: demanding impossible

A link to an interview recently done for the Festspiele in Berlin: Interview Berliner Festspiele

John Jordan is an art activist. He founded the direct action groups Reclaim the Streets and the Clown Army, worked as a cinematographer for Naomi Klein’s The Take, co-edited the book We Are Everywhere: the irresistible rise of global anti-capitalism (Verso 2004), and lectures in theatre and fine art.

Isabelle Fremeaux was a lecturer in Media and Cultural Studies at Birkbeck College-University, London, before deserting the academy to set up a new self managed education project in France. Her action research explores popular education, storytelling and creative forms of resistance.

Together they co-founded the art activist collective The Laboratory of Insurrectionary Imagination, and co-authored/directed the film book “Pfade durch Utopia” (nautilus, 2013) They are in the process of setting up a new school for art activism and Permaculture with the new land based collective La r.O.n.c.e (Resist, Organise, Nourish, Create, Exist) in Southern Brittany, France.